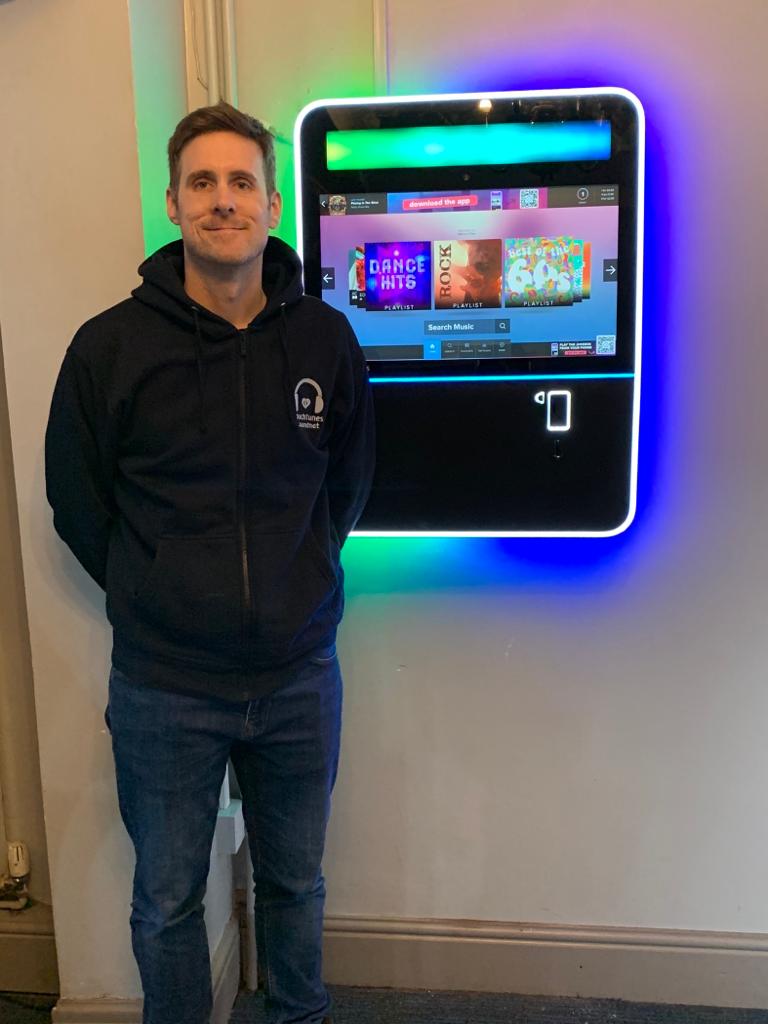 With every jukebox that TouchTunes sells, there is a bonus feature added at no extra cost. That bonus is Carl Adams, International Technical Service Representative – who will help new customers with their first install, troubleshoot any issues down the line and carry out on-site training to help staff and their customers to get the most from their new equipment.

Carl has been in the industry for around 20 years, starting at Claremont Automatics as a service engineer and working for TouchTunes for the past six years. “Carl is incredibly popular with our customers,” says Toby Hoyte from TouchTunes. “There’s nothing he doesn’t know about the product and he’s great with people.”

“I enjoy going along to the first install or even the first couple, depending on how confident the customer is,” says Carl. “I don’t think it’s a standard service in the industry but we find it’s much appreciated. I go through the functionality of the jukebox either with the engineers or on site. One of the main challenges can be the online connection – we prefer it to be hard-wired to the router but if that’s not possible we have other options which we can advise on the best possible ways for sites to access the internet for their jukeboxes.”

Carl also shows sites how best to set up a music profile for the style of the pub. “You can have different options of background music styles during the day. If they have a quiet crowd in at lunchtime for example you might want to set adult contemporary to suit the mood,” says Carl. “But if you want to make things feel more lively, then we have dance genres, rock or soul  genres – they can all be stylised for the pub.”

As for the location of the jukebox within the site, this is normally predetermined  – if the Angelina is replacing an existing jukebox for example – however – Carl will make suggestions on positioning if required.

“Some pubs are set in their ways and have certain areas where they definitely want the jukebox,” he says. “Sometimes, however, we go in and it’s a blank canvas and we can talk to them and give them advice on the best way they can show off the jukebox to attract custom and what to avoid – such as placing a jukebox in the way or on a corner where it may get knocked. A lot of it comes down to the connectivity again, as this is crucial.”

Carl will visit operators and carry out training at depots for engineers new to the product. He will also show them the benefit of the Tempo Portal which allows them to see how each of their jukeboxes is performing on site. “Tempo allows operators to make changes remotely to their jukeboxes, so they don’t need to send an engineer to site every time, which is costly in time and fuel. It’s also possible for operators to give their site owners or managers certain Tempo privileges, so that they can change their music preferences, for example via Music Manager.”

“It can really make a difference to the performance of the jukebox when the landlord or landlady takes an interest,” adds Carl. “It helps instantly if they are engaged with it, because once we have left, they are the ones who will show the punters how it works, show them the options, genres and new artists. Engaged staff really drive the jukebox.”

Despite his background as a service engineer, Carl’s role has now evolved to become more customer-facing, which is something he enjoys. “I like that aspect of my job, it’s great going to see new customers and meeting all the different characters,” he says. Carl has also learned not to trust first impressions. “I can never really gauge how successful the jukebox will be on site,” he says. “There are some locations where you are confident it will perform well and others where I expect it will do reasonably well but in fact they turn out to be top earning venues – there are always a number of factors which can contribute to the success of the jukebox on site.”

Carl believes that having a representative from TouchTunes on site to support the operator at the first install gives a good impression to customers and this has an effect on success from the very start. “I think it sets the tone,” he says. “The landlord or landlady and the staff on site can see that this is not just another jukebox and that the operator is not just ticking this piece of equipment of the list. They can see that we have come to help and advise and to put the pub at ease with the jukebox set-up.”

Next: Jubilee Playlist for Patriotic Pubs