The diversity of the current music scene is reflected in the fact that the most played Soundnet jukebox tracks for 2015 are all by different artists. Across the top 100 most played tracks, no one artist could be said to dominate, but with three entries each; Ed Sheeran, Meghan Trainor, Sam Smith, The Weeknd, and perennial favourites Oasis have a strong showing. 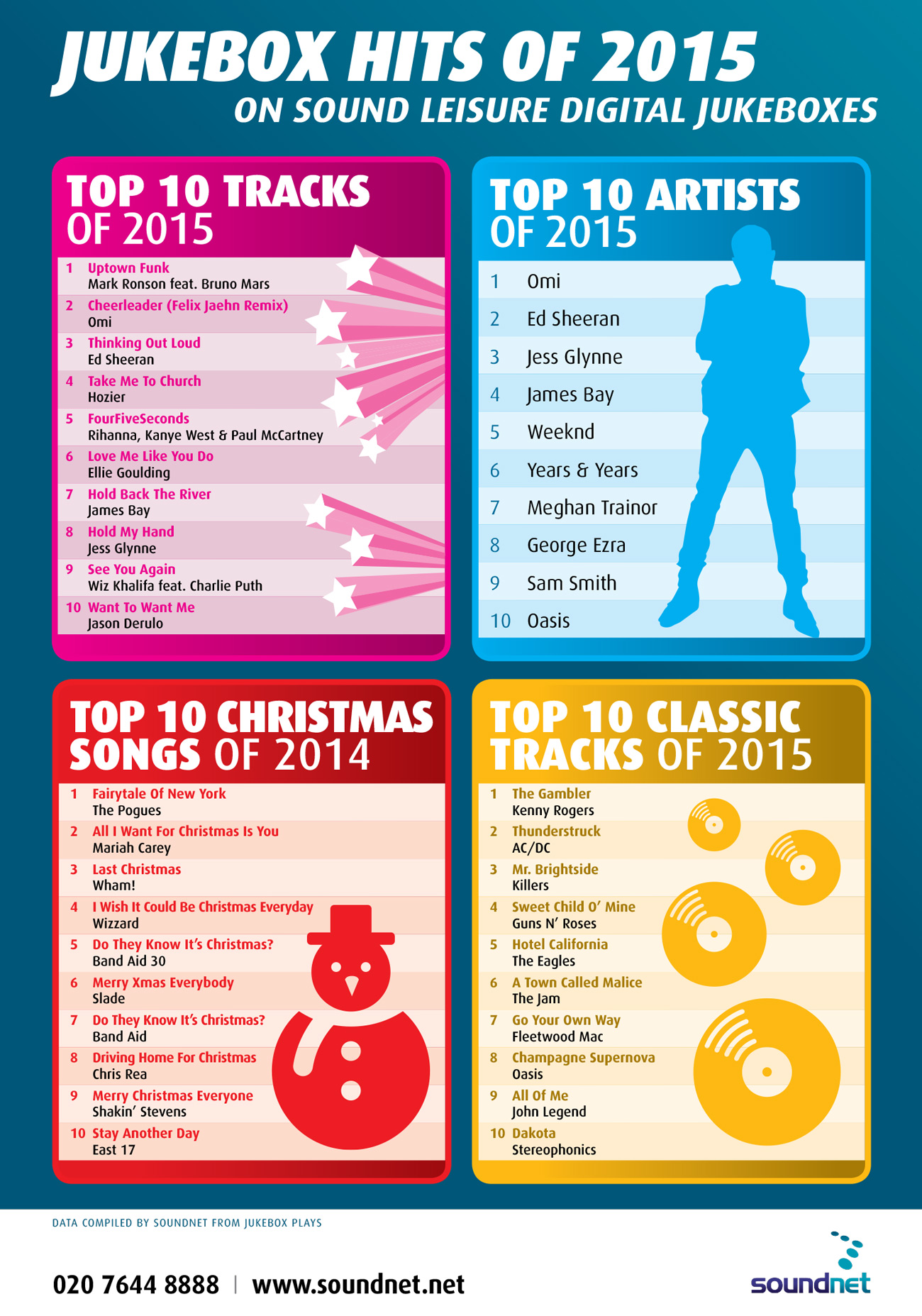 As well as the diversity of artists, the range of genres also shows that jukebox users have eclectic tastes. Dance music has a slightly higher rate of play than other genres. However, once again no one Dance artist dominates, but there are a plethora of Dance singles that manage to take over the national tastes just by being strong tracks. These include; Omi – Cheerleader, Philip George – Wish You Were Mine, David Zowie – House Every Weekend, Lost Frequencies – Are You With Me?  all of which appear in the top 30.

“This lends further weight to the idea that people are less fixated on a single artist and more inclusive in their taste, a by-product perhaps of streaming where the listening experience is to flit from one artist or genre to another with ease.” says Lee Taylor – Head of Music at Soundnet.

The most played track of 2015, ‘Uptown Funk’ is no surprise. Although released towards the end of 2014, the track dominated the airwaves well into 2015 and has racked up many more plays than the second most popular track in the Soundnet Jukebox 2015 chart.

The highest back catalogue track is Kenny Rogers – The Gambler – which has a strong presence in the chart every year. Similarly, the other highly placed back catalogue tracks – AC/DC – Thunderstruck, Killers – Mr. Brightside, Guns N Roses – Sweet Child O’ Mine are regular end of year chart entries.

Christmas songs are also hugely important as the charts indicate. Operators are advised to check ahead of this year’s festivities that their jukeboxes contain all of the top-played seasonal tracks in the charts.

“These charts demonstrate that the high earning tracks are new releases. As an operator you need to ensure your jukeboxes are fully up to date.  The delay of even a few days can mean a loss of significant income,” warns Soundnet’s Toby Hoyte. “The chart also shows the importance of classic tracks. Some of these older songs have made operators hundreds or possibly thousands of pounds,” he adds.

At Soundnet we also offer free catch-up disks and booster packs to ensure all Sound Leisure jukeboxes can be brought up to date no matter how old or what model juke you have.

“We also offer our free Venue Favourites service where customer can choose specific songs or artists that may not be featured on the jukebox. This can include local bands, even karaoke recordings.  Our current turnaround time for a Venue Favourite order is approximately two weeks”.

“We have seen expansion of our soundjack service both in terms of jukebox sites using the service and the steady roll out of our own soundjack BGM system.  2016 will be a big year for soundjack – we fully anticipate putting soundjack in 2500 sites in 2016,” adds Toby.

Next: Freestanding jukeboxes get outstanding results